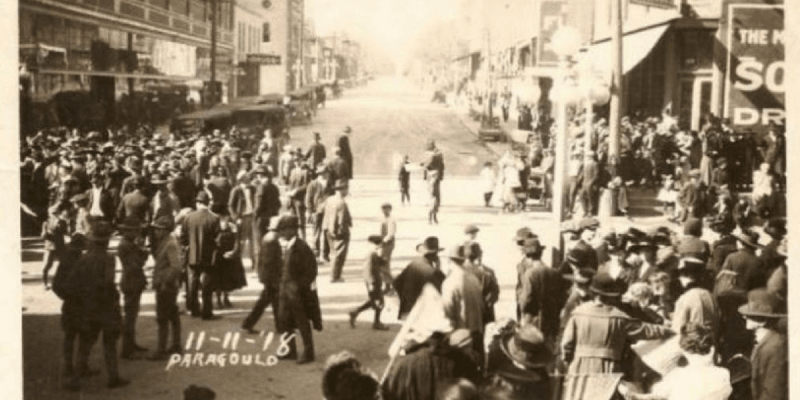 The year of 1882 was a historic one for Greene County. In that year, two railroads built their lines into the county and crossed at a point where a town would be built. One was the St. Louis and Iron Mountain Railroad, later to be known as the Missouri Pacific. This railroad was headed by the famous railroad magnate Jay Gould, who already controlled some 5000 miles of track in Arkansas and the Southwest. The other railroad was the Texas and St. Louis, later called the Cotton Belt. This was a narrow-gauge line with J. W Paramore as president. This line originated in Texas and was originally built to ship Texas cotton to the compresses in St. Louis by direct line. The crossing of the two railroads was not just a chance crossing, but one of Gould's tactics to cut the business of the fledgling railroad.

When a name was sought for the newly created town at the junction of the two railroads, a group of citizens promoting the new town wished to use the name of Beulah (Bula) which was the nearest point of mail delivery. Finally, the name evolved by combining syllables from the names of the two railroad presidents- joining together the two protagonists. "Para" for Paramore and "Gould" for Mr. Gould, thus making Paragould a truly original name for an unusual town.

Legend says Mr. Gould, who considered himself first in railroading, objected to having his name consigned as the last syllable. For a time, he refused to use the name on his schedules and used instead a local name of Parmley. There was finally a compromise to use the name "Para-Gould". As time passed, the hyphen was dropped and the one word, Paragould, without a capital "G," became the name. 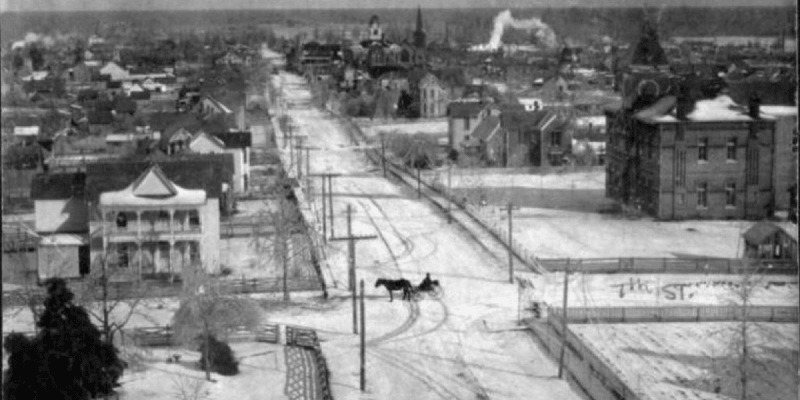 Paragould was incorporated on March 3, 1883, while it was still an uncultivated timber-covered tract. Most of the area for the town was part of a 281-acre farm owned by a settler from Tennessee, Willie Pruett, who had purchased it in 1869.

Paragould made fast strides toward becoming a flourishing town. By 1890 the population was 2,528. Within ten years of the founding, both a municipal water plant and an electrical power plant were organized and there were several private telephone companies.

The Thompson Classical Institute, established in 1891, drew students from far outside the Northeast Arkansas area. There was also a business college and a Bible Institute. 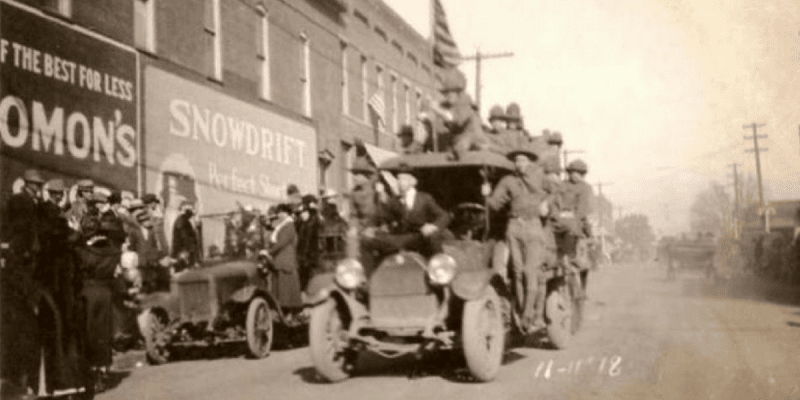 On October 11, 1887, the Paragould and Buffalo Island Railroad was incorporated. The railroad was built by Paragould businessmen across the St. Francis River bottoms to transport logs from the valuable stands located there, to their mills located in Paragould. To have the railroad cross the swampy land would not be easy. Building upon the 40-mile long by 15-mile wide sandy ridge of Buffalo Island was the logical choice. The railroad passed through several small boomtowns east of Paragould. Bard, Brighton, Bertig, and finally Cardwell and Hornersville, Missouri were some of those that sprang up. Eventually, the line would extend into Blytheville, Arkansas. Also about this time, it was written that Paragould was a "thriving town of about 4,500 inhabitants". 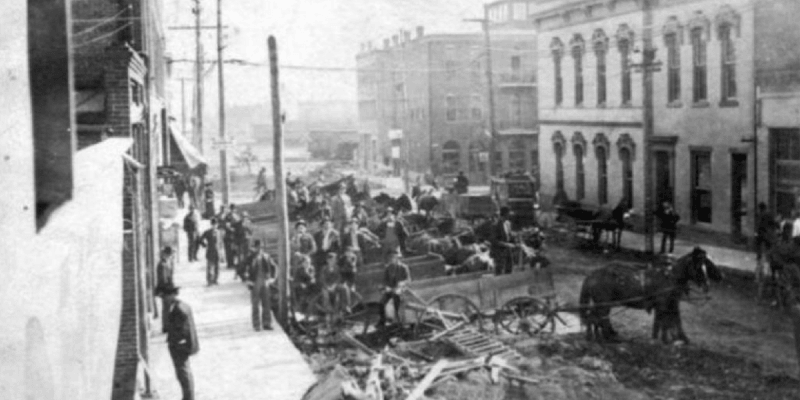 During the first part of the century, Paragould took on a cosmopolitan appearance. Great white way lights were installed downtown along with several buildings. One of the first of several elegant department stores with rugs, elevators, and special departments, even a grocery department, was built in 1900 by the Bertig Bros. The Vandervort Hotel of modern and special design was well-known throughout the state. Streets were paved and the young city flourished.

However, as the 1920s opened, the great timber industry was beginning to draw to a close and the Depression was approaching. The denuded acres surrounding the town where the vast tracts of timber had been cut were starting to turn to agriculture. This would become the county's most important industry. However, as the population continued to decline, it was time to turn to some other types of industry that had been drawn to the community. 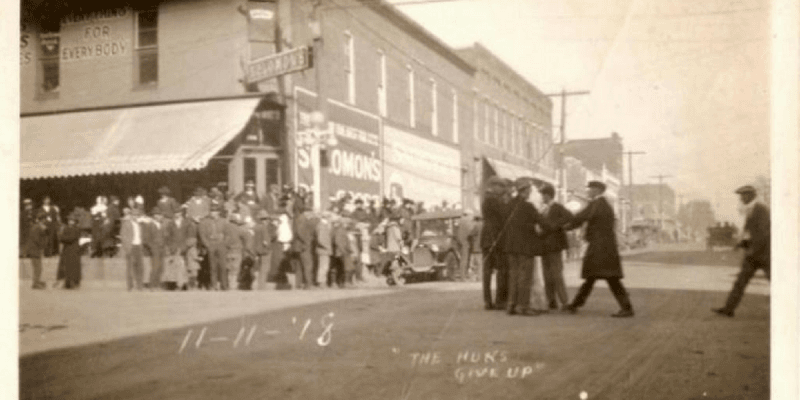 World War II brought a halt to several building projects that could not be resumed until after the war. One of the first community projects was the construction of a new hospital. Through a public subscription and a bond issue, a modern facility was opened in 1949 on Kingshighway. A great community achievement. Today, the hospital is completely modern and is operated as the Arkansas Methodist Medical Center. Also through subscription and a community tax, the community built Greene Acres Nursing Home to replace an old outmoded poor farm. Originally located on South Linwood Drive, it too has continued to grow and has since been moved to Country Club Road.

The Paragould Library opened in an upstairs room in 1933, supported by service clubs and individuals. Through subscriptions and a millage tax, the library finally achieved its own building. The widow of Ruport Wright, publisher of the Daily Press, left a generous bequest to build a modern library building. It opened in 1974 as the Wright Memorial Library which is now the headquarters for the Northeast Arkansas Regional Library System. A recent bequest of $100,000 by Sam Lipscomb for use as a historical and genealogical division makes it an outstanding research library for Arkansas history and genealogy.

Paragould's population is estimated at around 26,113 today. It has not been so much the numbers, but the spirit of the people of Paragould that points to the continuing growth. 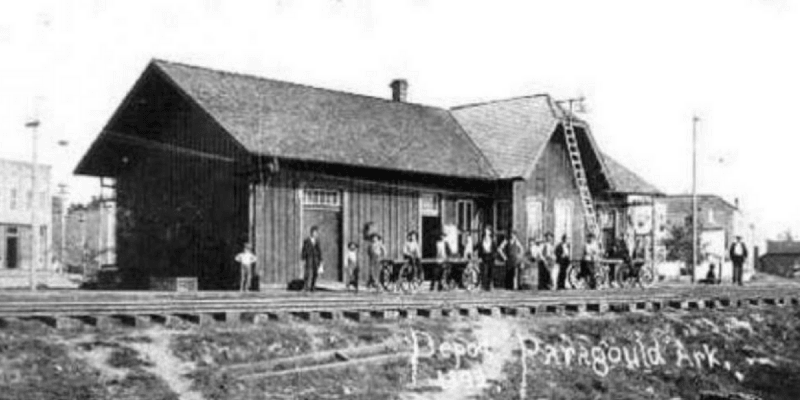 In 1885, the town acquired Linwood Cemetery, which was located, at that time, away from town, and is now within city limits. The earliest burial that we know of was February 11, 1869. Learn more about the cemetery on the Linwood Cemetery page.